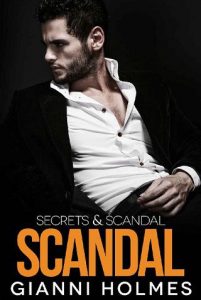 Charles knows his affair with August is the most scandalous thing he’s ever done. It has the potential to ruin his relationship with the people who matter most to him. Worse, the expiration date he’s tacked on their affair has lost its meaning since he’s gone and fallen in love with his Sir.
August believes there’s a future for him and Charles. He might not be able to see it now, but he’s not prepared to let Charles go. Not when Charles has brought back something to his life he thought he’d lost forever.

When an anonymous person threatens to expose their affair, Charles is given an ultimatum. Will he do the right thing and walk away from a love he never thought he would ever experience again? Or will he choose August and damn the consequences?

Scandal is the final book in the Secrets & Scandal duology. It contains a Sir badly in need of aftercare, scandalous secrets, and a precious baby girl who puts everything back into perspective.