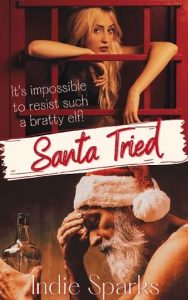 He’s unlike any Santa who came before him. She’s not like the other elves.

Big Nick lived a life of debauchery and risk-taking until his father retired. When it was time for him to take the sleigh reins and become the next Santa Claus, he stepped into the role willingly, and he takes the job seriously.
Despite being more Daddy Dom than jolly old man, he keeps the North Pole running smoothly and never misses a day in his office at the toyshop, overseeing the elves. Big Nick knows how to keep his private life private, and when Christmas comes, the whole world can count on him to bring the magic, just the same as every Santa throughout history.
But even Big Nick doesn’t know what to do with Calista. She’s the brattiest elf he’s ever encountered, and no amount of discipline makes a difference in her behavior. She has no interest in making toys and sees no reason why she can’t take on an entirely different role. If Santa would only give her a chance, she knows he’d see how perfectly suited she is to his taste.
Can Big Nick break Calista of her bratty ways? Or will she break his resolve and be the first elf to help Santa empty his sack?