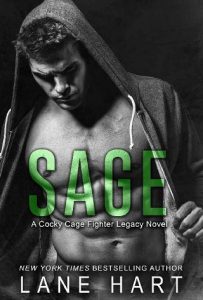 Sage Abrams has been training for years with one goal in mind – to win a welterweight championship title, just like his father Linc. That’s why, unlike his twin brother Talon, he keeps to a strict regimen. He doesn’t ever date, drink, or party.
With an undefeated record, Sage is finally going to get his chance at a belt. The only thing that stands in the way of him becoming the best welterweight fighter in the world is his opponent, Cyrus Cutler, and an illegal hit that knocks him unconscious.

When Sage wakes up in the hospital, he doesn’t remember the fight or anything else that’s happened in the last few years. The one person he wants by his side as he recovers is Eden, his ex-girlfriend.
Eden is suddenly caught up in a love triangle. After Sage’s injury, he doesn’t remember dumping her and pushing her into his brother Tal’s arms in order to concentrate on his training.

Will Eden pick Sage, the sweet, determined brother who has already broken her heart once, or will she stay with Tal, the tattooed, bad boy who is only looking for a good time?