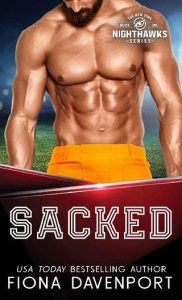 Prentice Wright was one of the best quarterbacks in the league. He was known for making all the right moves on the field. It was how he led the New York Nighthawks to victory so often.
Falling for his teammate’s sister wasn’t a smart play. Especially when Naomi Scott was more than a decade younger than him.
But Prentice was also known for being relentless in the pursuit of his goals…and he’d never wanted anything more than to make Naomi his.