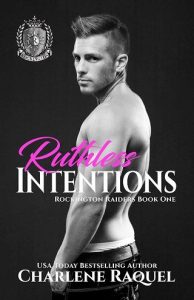 He’s an arrogant star soccer player and she’s the school reporter who’s going to expose him.

Lacey Grant’s the top reporter at the Rockington University newspaper and has no time for entitled, rich jerks. She’s after a story that could launch her career after graduation, but her boss won’t let her pursue it unless she helps shut down a scandalous gossip site, the Raiders Forum.
Kyle Maddow rules the soccer field at the University. As the team’s leading scorer, he’s the player that every girl wants and he takes full advantage of it much to the Raiders Forum’s delight–after all, he gives them more than enough content. To Kyle, the Raiders Forum was an amusing annoyance until his coach benched him for embarrassing the team. With the biggest rivalry game only two weeks away, he has to discover who is behind the form and stop them.
Kyle’s best chance is to team up with the prickly reporter who hates him. When Kyle tries to turn his legendary charm on Lacey, she knocks him on his butt. Literally.
With mysterious accidents and deadly secrets revealed, they are forced to work together to stop unknown assailants before they become the next victims