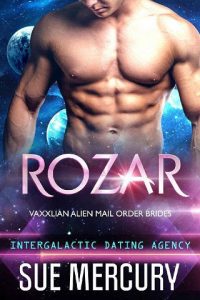 The otherworldly stranger is the biggest, fiercest looking alien warrior she’s ever seen…and she’s already agreed to become his mate.

Nadia knows if she stays on Earth, her mob boss ex-husband’s goons will eventually find her. When the opportunity to become a Vaxxlian Mail Order Bride arises, she can’t sign up fast enough. She’s soon matched with a huge, fierce-looking alien warrior named Rozar who wants to mate with her upon their very first meeting. Whoa there. Slow down. She’s desperate to escape Earth, but she also wants to be sure Rozar is a kind, decent alien before she commits to spending her life with him. She rushed into her first marriage and look what that got her—a one-way ticket into the Witness Protection Program.
But the clock is ticking. The ship that brought Rozar to Earth departs in two weeks. Should she take a chance on the handsome otherworldly stranger whose kisses make her melt? Or should she rush back to her hideaway and hope for the best?
One glance at the little human called Nadia and Rozar knows she’s the female meant to become his. Her bottomless blue depths mesmerize him and her sweet demeanor calls up his protective side. He wants nothing more than to claim her and bring her back to New Vaxx. But the dark-haired beauty is reluctant to mate with him, despite his promises to always keep her safe and provide for her and their future offspring.
Before he can convince her of his devotion, the little human disappears without a trace. Word of her dangerous past reaches him and he’s more determined than ever to protect her, even if vanquishing her enemies means she no longer has a need to leave Earth. But he’s just as determined to claim her as his, and Rozar will do whatever it takes to convince Nadia she’s meant to be his female for all time.