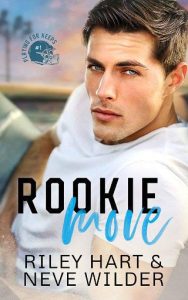 Falling for a teammate who also happens to be your brother’s best friend? Total rookie move.

McRAE: I’ve had a crush on my brother’s best friend since the moment I laid eyes on him four years ago.
Warner Ramsey is 225 pounds of pure hotness, a media darling, and one of the best NFL quarterbacks in the league.
Hell, he’s the reason I figured out I’m solidly bi.
It was easy to keep my crush under control when I was in college. Now, we play for the same team, and every time he talks smack, I want to shut him up. With my mouth.
But I’ve got other things I should be focusing on, like dominating my rookie year with the Denver Rush and finally stepping out of my brother’s shadow.
Besides, Ramsey’s straight.

RAMSEY: I’ve never tapped into my bisexuality—never told anyone except my best friend that I’m bi. All I want is to play football and not draw media attention like my dad, who got ousted from the league.
Garrett McRae is my biggest temptation. He’s gotten under my skin for years.
I’m supposed to be looking out for him, not thinking about getting him naked.
And definitely not the kiss we shared.
That I somehow instigated.
It was stupid, and not like me, but God, it was hot.
We’re teammates, with million-dollar contracts on the line. And yet…is a little experimentation really so bad?

Rookie Move is a low-angst, high-heat sports romance in the Playing for Keeps series.