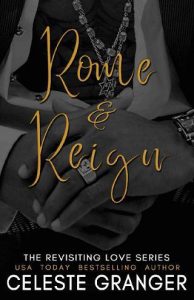 When Reign Angelle first met him, being in Rome’s orbit caused a cacophony of conflicting emotions that only an ensuing encounter with him could resolve. When their paths cross again, it leads to an enthralling seduction of love that surpassed either of their wildest dreams. Yet, as wonderful as Reign’s relationship is with Rome, the patriarchal challenges she faces with her family nearly severs all familial connection. Finding the strength to stand up to her father and the oligarchy that plagues women around the world becomes Reign’s personal fight; a battle she doesn’t fight alone.

**This is a spinoff series of The Men of Mafia St. Clair. It is highly recommended that you read that series first, but it is not required. This book can stand alone.