Home
Historical Romance
Romancing the Past by Darcy Burke (ePUB) 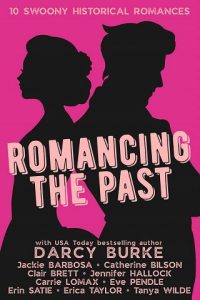 Sparks fly between a seductive rake and a self-declared spinster spitfire. When he’s suspected of murder, she may be his only hope for salvation—and love.

When the new Duke of Clive realizes that the suicide note written by his predecessor is a forgery, he suspects his ex-fiancée of foul play. As he investigates, he can’t decide if he wants to bring her to justice or rekindle the great love of his life.

Dealing with the Viscount – Clair Brett

He seized a second chance to seduce the wife he thought dead . . . and claim the secret child he did not know was his.

What If I Still Loved You – Erica Taylor

After a chance meeting, Henry and Anna search the castle for a box of letters, but can this star-crossed pair find their way back to each other? Or will their second chance be lost to fate, again?

A mysterious English nobleman, Lord Richard Northcote, has Miriam dreaming of adventures beyond her limited experiences. But is the promise in his kiss only a practiced lie?

An Earl For Ellen – Catherine Bilson

Orphaned and penniless, Ellen Bentley is astonished and relieved when the new Earl of Havers, her distant cousin, takes an interest in her welfare. She can’t help falling in love with Thomas, but how can she compete with the beautiful, polished Lady Louisa?

To escape Napoleon’s France, British agent Thomas Pearce and the woman he’s been sent to rescue, Sabine Rousseau, must pretend to be amorous newlyweds. But it isn’t long before neither of them is pretending and every night, there’s only one bed.

Not Quite a Rogue – Tanya Wilde

A man on the edge of ruin… A lady who thirsts to be loved for more than her dowry… Temptation has never tasted this rich.

Cub reporter Della will do anything to get her story. When her breadcrumb trail of scandal leads straight to the kitchen of Moss’s floundering hotel, can he win Della’s heart and keep his name out of the headlines?

Once a Fallen Lady – Eve Pendle

Handsome schoolteacher Alfred Lowe’s disapproving gaze makes Lydia Taylor fear for her subterfuge of respectable widow and capable mother. But a seduction of kisses, books, and savory pies will tempt her to risk everything for love.