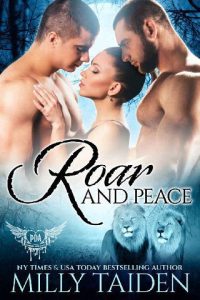 For being a witch, Dani Rhoderick has little control over her magical abilities. It’s as if someone bound her powers. Luckily, the power-hungry warlock who killed her parents hasn’t found her yet. Her life is such a mess. When Gerri Wilder promises her all she’s been missing, who’s Dani to say no love and romance. And maybe some heat in the sheets?
Mack Smith and Victor James, lion shifters, aren’t looking for their mate, but after a chance run-in with Gerri Wilder, that all changes. Unfortunately, the two long-time bachelors have no idea what to do with a mate. But once they see her, they can’t keep their hands off her. She’s so much more than they expected. Sweet, sassy and with curves for days. She’s also exactly what they need. In every way possible.
When Dani is attacked by a magic-wielding stranger, the guys go into protection mode to keep their mate safe. But the problem is how can shifters fight magic? The guys don’t know, but they’d better figure it out quickly because Dani possesses the most sought-after talisman in the magic world, and she will be hunted by the strongest evil until she hands it over or dies trying to keep her mates alive.