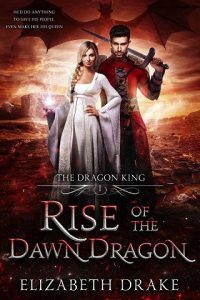 He’d do anything to save his people. Even make her his queen.

High Prince Rohan faces war with his northern neighbor, a necromancer’s taint on his lands, and growing civil unrest. He needs the gods to send his bride so he can become king, unite his people, and legitimize his rule. A bride they have sent for every previous high prince. Rohan will marry any woman They send. Even one that wears the armor of his enemy. Even one that rejects him. After all, he never expected to love her.

As a Knight of Valor blessed by the gods Themselves, Makayla has given up everything for Them. Even love. She thought she was ready for anything They asked of her. Until a magical accident finds her in a foreign kingdom deprived of the gods’ light and married to its new king without ever having said “I do”.

But the sham marriage to a man she refuses to fall in love with is the least of her worries.
An ancient evil followed her, an evil that stalks the land and threatens to destroy everything in its path. It will take more than either of them can do alone to stop it. Together, they might just be strong enough, but only if they can accept the gods’ greatest gift: love.