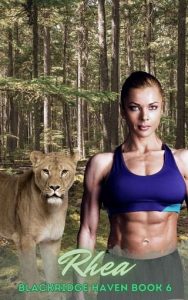 No one escapes the pride.

Rhea’s been hiding from her pride since she escaped over a decade ago. She thought they’d finally given up until a letter showed up on her desk, warning her of what was coming. They found her and they weren’t going to be nice about bringing her back. When a rogue lion shifter shows up in her territory, she’s immediately suspicious that he’s here to take her away. But when the pride starts to threaten her crew, she has to choose between trusting the one person she was determined to avoid or risk losing everything she’s built in her new life.
Link was tired. Bone deep exhausted. But when his friend called him about someone threatening his new compound, he was determined to show up and help. So how did he end up being roped in to help a lioness who wanted nothing to do with him? Having never met a shifter so afraid of their own kind before, he didn’t know how to protect her without forcing the issue. And she didn’t take too kindly to that. What did it say about him that fighting with her finally woke him up and drew out his lion?