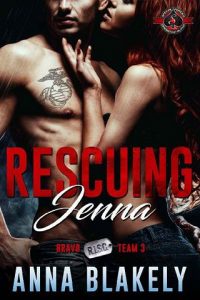 A man who believes he’s unworthy of love. A woman determined to make him see the truth. An enemy watching from the shadows, ready to destroy them both for good.

Former Marine Adrian Walker has been called a lot of things…Liar. Traitor. Murderer. Bastard. In order to keep his country safe, he had to become all those things and more. And he’s been fine with it, until now. Until her. One glance into Jenna Shaw’s emerald eyes is all it takes for Adrian to fall. But after everything he’s done and every enemy he’s made, Adrian knows a future with the fiery redhead is an impossible dream. She deserves to be happy. To live a life free from the dangers of his world. She deserves…more.

Within seconds of meeting Adrian Walker, E.R. nurse Jenna Shaw wanted to kill him. Months later—after a late-night appearance on her doorstep, followed by a cold and heartless vanishing act—the only thing that’s changed is her motive. Desperate to escape the tumultuous memories of the sexy bad boy, Jenna accepts a job in an area some consider dangerous. What she doesn’t know is danger has already been watching her. Waiting for the perfect chance to use her in his sick game.

When Jenna suddenly goes missing, Adrian will do whatever it takes to find her. Even if it means asking the men of Bravo—as well as Ghost and his Delta team—for help. Can Adrian and others find Jenna in time to save her, or will the dangers from his past be the catalyst that destroys them both?