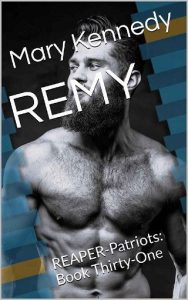 Remy Robicheaux has never needed the spotlight. He’s devoted to his family, he served his time in the Army, came home and now works for his Uncle Matthew. He loves his life and more than anything, he loves the land. His cousin Gaspar has been his hero for as long as he could remember and just being able to be part of the team has given him a fulfilled life. He would do anything for the family, including marrying a starved, endangered girl. But don’t underestimate Remy. When angered, he is Robicheaux, through and through.

Charlotte Guthrie has been kept captive for almost half her life. She carries a secret that only she understands and can carry out. With her father dead, you would think she’d finally be free, but unfortunately there are much bigger sharks in the sea. Remy Robicheaux is unlike any man she’s ever met before. He’s kind, sensitive, caring, and intelligent, but he’s also deliriously sexy. Given her options, marrying Remy may be her only hope and her greatest wish come true.