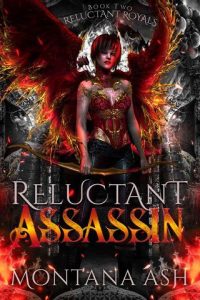 Sabre is a fighter, not a lover. Her whole life has been about duty, violence, and death. It may have been a life she accepted reluctantly, but it’s a life she excelled at. Which is why suddenly becoming a girlfriend and having all her secrets revealed is somewhat of a culture shock. Luckily, her new mate is a General, a King, and a demon with a beast in his soul. So he can handle it – and her.
Brax has just discovered he’s been living a lie. The angst and the grief of the past year was unnecessary – some of it anyway. But at least his trip into Emo-ville led him to his sexy, violent new mate. So it was all worth it. Still, they now have quite the to-do list.
First, they need to track down the owner of Sabre’s old assassin den, question him with lots of pointy things until he bleeds, sever the soul-deep connection he has with Sabre as her ‘master’, and figure out why the douche-canoe was so invested in overthrowing the throne. Second, they must uncover who is behind the conspiracy to eradicate the line of Cerberus so Brax’s older brother, Mikhail, can return from hiding and take his rightful place as King. And third? They need to not get dead doing it.

Please note: Reluctant Assassin is not a standalone. It is book two in the Reluctant Royals series. For the best experience, the series should be read in order.