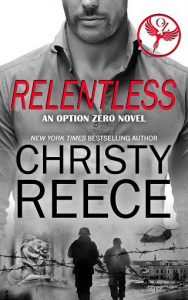 They met in darkness. Each one going through their own personal hell, they gave each other hope and a reason to live. Their connection was real and true but fate had a different plan.

OZ operative Liam Stryker is known for his bravery, his wit, and his ability to find an escape when there’s no way out. He’s also a man on a mission. He needs to find her. She’s out there somewhere. He refuses to believe she’s gone. Someday, somehow, he will find the woman he’s never seen but loves with all his heart. And if it’s the last thing he does, he’ll find the people responsible for causing her pain.

Aubrey Starr once had a plan for her future, but when her life is derailed and upended, she’s motivated to create a new one. As an award winning documentary maker, she’s known for digging deep to uncover and expose evil. Few know about the past that drives her or the man who inspires her. She never knew his real name, never got to see his face, but without him she wouldn’t have survived. Even though she doubts that he’s still alive, she dreams that one day she’ll see him.

Evil takes many avenues and insinuates itself into every aspect of life, causing havoc and pain. Some are born to fight against it with every fiber of their being. Others are thrown into its path and have no choice but to stand up to it or die. Liam and Aubrey have been on parallel paths for years. When their paths finally converge, it’s as if life has given them another chance and everything has fallen into place.

But there are enemies out there who will do everything they can to make sure Liam and Aubrey never find the happiness they seek. When events take a tragic turn, they’re faced with the knowledge that fate has thrown them a new, cruel twist.

And this time, there’s no way out.