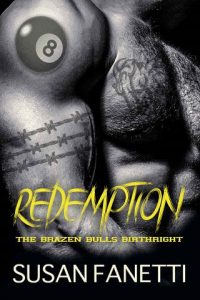 A NEW SEQUEL SERIES TO THE BRAZEN BULLS MC

Edgar “Eight Ball” Johnston is the new president of the Brazen Bulls MC. After living his whole life without a filter, doing and saying whatever he wanted and damning the consequences, he’s shocked that his brothers voted to give him the gavel.

Now he has to figure out how to lead. How to become a man people will follow. How to honor the men who went before him. Hard lessons for a man his age to learn—and painful, too.

Marcella Lewis is the lead singer of a blues band with some regional fame. She and her bandmates are cobbling together their livings, and they’re looking for their big break. Marcella has an added incentive for success: she’s a single mom, and she wants to give her son every opportunity to become the man he wants to be.

Eight and Marcella hooked up for a few weeks back in the day, but more than a decade has gone by since they’ve seen each other. And good riddance, as far as she’s concerned. She has historically awful taste in men, and Edgar Johnston is a prime example.

Now, after all those years, he’s popping up in her life again, and generally being the jerk she remembers. But she also remembers why she was attracted to him in the first place—and the sense she’d once had that there was a good man buried deep under all the muscle and bravado.

Eight wants another chance. Marcella might be willing to entertain the idea, but before they could possibly work, he is going to have to change. And so is she.

If Eight really wants to be a better man, he’s got a lifetime of wrongs to redeem.
If Marcella’s going to forgive him, she’s got to give up some control over the life she’s managed so carefully.

Only family is worth that work.