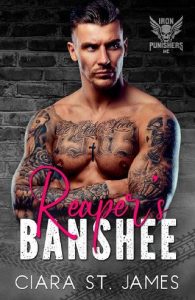 Reaper:
Being the president of the Iron Punishers MC should’ve been enough for Reaper. Only the last year or so, has him feeling like something is missing. When he sees his sister and her little family, he thinks he might know what that is, someone special. That someone you can always come home to at night and who’s always there for you.
However, the way things are going, he’s doubting such a person like that exists for him. That is until he strong-arms a club brother into going to the doctor and he sees his dream princess, Snow White, in the flesh. Seeing her instantly has him deciding he has found his one, only she isn’t giving him the time of day. He works to make her see they’re meant for each other.

Cheyenne:
Cheyenne has fought hard to try and overcome her fears. The main one being her fear of bikers. She does everything she can to avoid them in her town. That is until a couple of them walk into the doctor’s office where she works and she’s knocked breathless.
While she tries to run and avoid Reaper, he’s determined not to let her get away. He’s not fighting fair. Just as she starts to relax and goes to his clubhouse to meet his club, a terrifying ghost from her past shows his psychotic face. She’s been betrayed! She’s convinced that she let her guard down and Reaper has betrayed her.
As they battle to overcome fears, dark enemies, threats, and the pain of the past, Reaper and Cheyenne learn that anything is possible if you love enough. Reaper is willing to bring out his inner devil to reap those who stand in the way of his happiness and the safety of his woman. He’s more than willing to go to war and show these evil men trying to destroy good MCs, why he earned the nickname, Reaper. God help those who try to mess with Reaper’s Banshee.