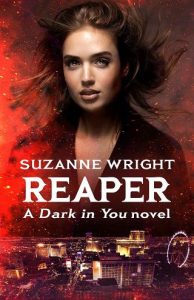 Falling in love can be a nightmare…
Piper’s always been aware of Levi. He’s the kind of man who it’s impossible to ignore. With his broad, muscular frame and gunmetal grey gaze he makes a statement without saying a word. But it’s not until her psyche brushes his in an unguarded moment that they both realise: they are anchors.

It’s a shock. Neither Piper nor Levi are used to needing anyone, the crackling attraction between them is making both their demons crazy and to make matters worse, Piper’s narcissistic stepsister is Levi’s ex–and she’s not ok with the situation. The whole thing is like a bad dream–and Piper knows all about them since she’s a Nightmare, a demon with the ability to trap people in their worse memories forever.

Then an old terror appears from Levi’s past–a serial killer everyone had believed was dead. They are cold, ruthless and will stop at nothing to achieve their twisted ends. Time is running out–will Piper, used to putting everyone else first, learn to fight for what–and who– she wants?