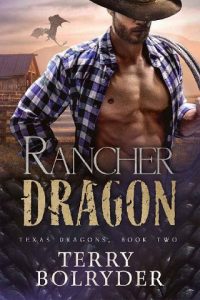 Save a horse, ride a rancher dragon…

Beck the mountain dragon knows he’s a monster, good for nothing but fighting. So when he goes down during a fight to defend Dragonclaw Ranch, he thinks it’s probably for the best. As he’s dying, he gives his coin to a passing stranger, hoping she’ll lead his friends to his body. But Beck doesn’t die, and when he wakes up, he looks into the eyes of a curvy, gorgeous woman that ignites his dragon’s possessiveness. The laws of Dragonclaw Ranch say he owes her a favor. But Beck’s pretty sure the best favor he can do is to stay away from the pretty lady, no matter how much his dragon growls ‘mine’.

When a huge, gorgeous mountain of a man fell unconscious on Sierra’s land, she didn’t hesitate to ride out and finally meet her intimidating neighbors at Dragonclaw ranch. They all live up to their legends, with gorgeous, silver-eyed Beck catching her eye most of all. But after a grumpy stand-off with Beck, Sierra heads back home, not wanting to cause more trouble. But when Beck shows up and saves her, insisting on staying around, she can hardly say no to the mountain of a man. Especially when all her body wants to say is ‘yes’ to him.

As Beck guards Sierra and helps on her ranch, heat explodes between them under the beautiful western night sky. But Beck knows that even though this is the most happiness he has ever known, Sierra deserves more than a monster with a past soaked in blood. But when danger from multiple quarters comes calling, Beck is going to realize that the possessive, giant monster inside him might just be the hero his mate needs.