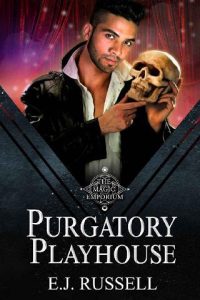 Staging a musical in Purgatory can be absolute hell.

Lonnie Coleridge last saw the sun in 1968. Since then, he’s been consigned to Limbo, still wearing the same tie-dyed T-shirt and bell-bottomed jeans he had on when he left his life behind. He and others like him have one chance each year at redemption: produce a show for the Greek pantheon. Whoever pleases this very specific—and temperamental—fan group could earn the right to move on.
But after a literal act of god (*cough* Hermes *cough*) destroys their sets, lights, and costumes, the company needs emergency help to rebuild. Without it, all of them could poof out of existence forever.

Out-of-work theater technician TD Baylor has precisely three things on his cosmic wish list: a job, a place to stay, and a boyfriend who isn’t a total tool. He thinks he’s got the first two nailed when he gets a line on a two-week gig that includes room and board. So what if the job tip came from a guy who was leaning way too hard into the LOTR cosplay at a sketchy Halloween pop-up? At this point, TD doesn’t have anything more to lose, so he figures…what the hell.
He didn’t realize hell was the operative word.

When Lonnie greets him at the theater door, though…whoa. TD fantasizes that item number three could be within his reach. But then Lonnie gives him the bad news: This is Purgatory Playhouse, aka Theater of the Darned. In two weeks—if they’re lucky and can successfully mount a musical version of A Midsummer Night’s Dream—the company will return to Limbo after the curtain falls. If they’re not lucky?

Remember that part about hell?