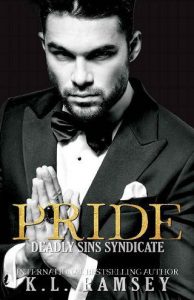 Damion Pride wasn’t one for playing games. He ran a successful business with his best friend, Finnigan Envy, and the deal that they were about to land could set them up for a very long time. The problem was, his Uncle Rock Greed, liked to play games and he sent in one very sexy blond to play with. Nixon Ryker looked like she knew how to play the game, but Damion wouldn’t give her that satisfaction. He’d send the sexy vixen packing before he’d ever let his Uncle Rock get his hands on the company he put his soul into building. The Deadly Sins Syndicate was just going to have to make do with not having a Pride doing the dirty work anymore because as far as he was concerned, he was out.

Nixon Ryker had a secret and if anyone found out that she was a legacy of The Deadly Sins Syndicate, Rock Greed wouldn’t just fire her—he’d kill her. She was a Lust but getting ahead in the syndicate by using her last name wasn’t how she wanted to do business. She legally changed her last name to Ryker, her mother’s maiden name, and never told another soul who she truly was. Her reputation as Rock Greed’s right-hand woman depended on no one finding out her identity. Nix had a feeling her life depended on her anonymity too, and not keeping her secret could end up getting not just herself but her whole family killed, and she wouldn’t let that happen.