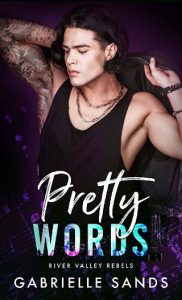 On the eve of my eighteenth birthday, I fell in love with a rock god.

Light-haired, green-eyed, and carved to heavenly perfection. Oliver. He’s the guitarist of Ritual Disruption, and he writes songs that are as devastating as him.
Who would have thought that I, Ivy Abbott, would capture his attention? On tour with my brother’s band, Bleeding Moonlight, I hear what they say about me. Boring, shy, straitlaced. Compared to my famous sibling, I’m nothing special.
They’re wrong.
After all, what’s more special than being chosen by a god?
But where gods go, demons follow…
Jamie’s shared the stage with Oliver for years, but they’re nothing alike. He’s dark where Oliver’s light. Jamie claims his bandmate is nothing but a fraud who wants to use me and toss me aside. I don’t believe him, no matter how much he insists he only wants to help me. Jamie is an addict who steals kisses and spreads dirty lies.
Lies. Lies. Lies.
Or so I tell myself.