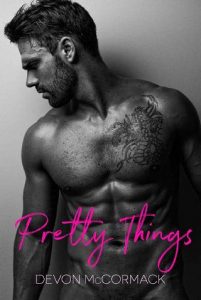 TY:
Pretty Thing–the moment Liam McKinney first uttered those words will be embedded in my mind forever.
He’s mysterious, intriguing…and off-limits since he’s my father’s friend.
Easier said than done.
The moment I laid eyes on the man with the dark eyes and intense stare, he awoke a primal hunger within me unlike anything I’d ever experienced before. For some time, I’ve been confused about my attraction toward men, but there’s no confusion when I look at him–just pure, unfettered desire to feel his body against mine, taste his flesh, breathe in his scent.
So many things an experienced man like Liam could show me.
But I don’t just want to sate my desire for his body–the physique of a Titan, those abs practically chiseled from stone, and one particular challenge that looks more than slightly intimidating…Yes, I want all that, but also so much more. To know everything about him. There’s something behind the facade he presents to the world. Sometimes, it’s as though I’m offered a glimpse behind the smokescreen–to who he really is. Yet it’s tricky to know the real Liam when he’s determined to keep his secrets.
I assumed he had a dark past.
But I didn’t realize he hadn’t left it behind and that I’d wind up roped into it–into a dangerous world so different from the one I’ve spent most my life living.
It’s a world of secrets, deception, and peril.
I quickly discover there’s a price to being with Liam McKinney.
But no price is too great when the reward is being the man in his arms and his heart.
Being his very own Pretty Thing.