Home
contemporary romance
Pretty It Up by Cee Bowerman (ePUB) 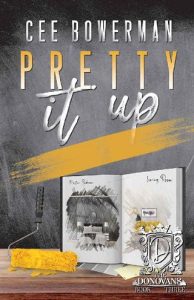 Sometimes love just isn’t enough, or is it?

Lana Gold, one of the Donovan triplets, found her one true love in college but lost him when the life he’d dreamed of became reality. Being an outsider looking in and so far away from her family and hometown took its toll on Lana and her marriage until she’d finally had enough and left it all behind.
Co-parenting with the man she’s still in love with has kept him in her world. Even though they live very different lives, they’ve still got their daughter in common. When a health scare threatens Clay’s life, Lana steps up and fulfills the vow she made when they married. In sickness and in health still applied after a divorce, didn’t it?
Clay Gold spent his youth trying to reach his ultimate goal of playing professional football for his favorite team. With Lana by his side through college and then the draft, he was riding the high that came from reaching a goal he’d worked for his entire life. Unfortunately, that goal and his career overshadowed his relationship and cost him his marriage.
Having to be content with just being friends with the woman he was still head over heels in love with was agonizing, but Clay had to make peace with it since that was the only way to keep Lana around. With circumstances spinning out of his control, Clay found the loss of the dream career he’d worked so hard for wasn’t as heartbreaking as he’d imagined, especially when he realized it was going to give him back the family he’d hated losing.