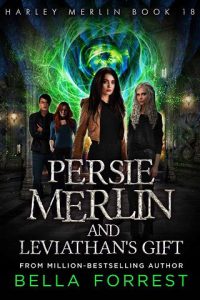 “The child must be named.”

A name can contain enormous power. But for Persie Merlin-Crowley, the powerless daughter of famed magicals Harley Merlin and Wade Crowley, her name hasn’t given her much in terms of abilities. That is, until her eighteenth birthday comes around and she Purges a gigantic Hydra that terrorizes the coven.

How could that be possible, if she’s never cast a spell in her life?

Then her mother reveals the deal she made with Leviathan almost twenty years before—a deal that let the monster name her firstborn Persie. Or rather, Persephone, as is her true name. He has given her the “gift” of Purging all manner of beasts… so that she may become the Queen of the Underworld like her namesake.

Persie is left reeling. She’s spent her life doodling monsters in the margins of notebooks and dreaming of far-off adventures. Now, she’ll have to stay under her mother’s supervision so her rogue Purges don’t wreak havoc. Unless she can find another way to control her powers…

When she learns about The Basani Institute, a monster-hunting program in Ireland, she knows this is her one chance. Alongside her Atlantean best friend and Uncle Finch’s annoying kid, she sneaks out to audition to become a monster hunter.

But Leviathan’s gift is one that never stops giving…
File Details: