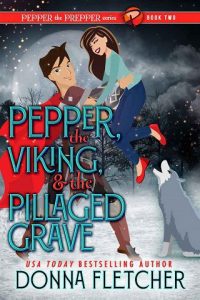 Mo has a gift for Pepper… a human bone.

Thirty-five years ago, seventeen-year-old Rita Carson was murdered, her eighteen-year-old boyfriend Travis Rodgers gone missing until… Mo digs up his grave.
Pepper’s dad, Sheriff Madison, was a newbie in the sheriff’s department back then and the one who discovered it wasn’t a Halloween prank but an actual dead body in the woods. It has troubled him all these years that the case was never solved. Now is his chance to solve it, but with Travis having been dead these many years who killed Rita, and now possibly Travis as well, and is he still around?
Pepper and Ian are on a mission to solve the thirty-five-year-old murder, but the murder isn’t the only thing the couple have to contend with. The mayor interferes in the case, wanting his father, Ted Barrett, then Sheriff Barrett, proven right about who he believed guilty and given the credit for solving the crime.
The thing that has Pepper the most upset is that Amy’s dad has shown up after deserting Amy and her mom when Amy was six years old and claims that he wants to make amends. Pepper doesn’t trust him, and she doesn’t like seeing her best friend so upset and either does Beau. Both are ready to protect Amy at all costs.
With a mile-long list of suspects from thirty-five years ago, Pepper and Ian begin eliminating them one by one and as they do things turn crazy and dangerous. And you’ll never guess who comes to the rescue… did someone say Vikings?

Join Pepper, Ian, their friends, and family in the fun when Vikings, pillaging, murder, and mayhem descend on Willow Lake, PA!
This is book 2 in the Pepper the Prepper Mystery Series. Pepper, the Highlander & the Dead Guy is Book 1.