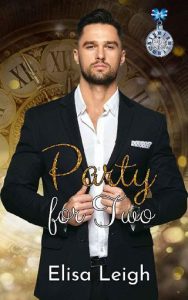 Mason Brooks owns half of Buck’s Creek, Iowa. He grew up in the small town but left for bigger and better things when he graduated high school. Mason was enjoying his life in the corporate world of New York City until his sick grandfather called him home to take over the family businesses. Now he’s stuck in Buck’s Creek out of obligation. When he’s invited to a New Year’s Eve party at The Tower, he wants to refuse, but he can’t. He’s expected to be there. It doesn’t take long for Mason to zero in on the thick curvy goddess of his dreams who’s spilling out of a lowcut dress being hit on by way too many men.

Deanna Grant is only at this party because her best friend insisted they come. She’d rather ring in the new year at home snuggled up in bed with a good book and snacks. Instead, she’s at this party wearing the only dress she could find that sort of fits and feeling incredibly uncomfortable surrounded by men who are looking at her like the only thing she has to offer is what’s between her thighs. Not that she’s offered that to anyone. Ready to bolt when one guy gets too close, she’s saved by the grumpy and elusive Mason Brooks. The men who’d been hounding her all night suddenly back off. How far is she willing to let this thing go?