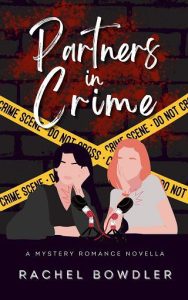 Though they are polar opposites in many ways, best friends Bryce and Thea are both attracted to all things horror, including true crime — and to prove it, they co-host weekly podcast episodes of Perfect Crimes together with their producer, Mikey, in the dusty basement of Stone Grange’s local bookstore. When a string of murders suddenly begins to plague their small, unassuming town and the police find themselves at a loss, it seems that there’s nobody more qualified to help solve the mystery.

However, it’s soon realized that Bryce and Thea are already more entangled than they could have ever expected, because the murders follow a pattern. Their pattern. With every case discussed in the podcast comes a new imitation of the circumstances surrounding the victim’s death, and Bryce and Thea find themselves trapped in a dangerous game of cat and mouse with the killer, as their friendship — and feelings that they’ve always left hidden until now — is pushed to its breaking point.When the evidence begins to pile up, conflicting suspicions of the killer’s identity begin to rise, and friends and acquaintances of the duo become victims; things seem to get closer to them with each death. Can they survive the dark shadow following them around town, and remain the strong-willed, closely connected partners in crime they’ve always been? Or will their obsession with murder prove their undoing in a final, emotional showdown as the killer is revealed?