Home
Paranormal / Sci-Fi
Own Her by Jenika Snow (ePUB) 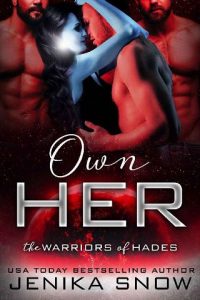 Mekenna’s life started off on the wrong foot as soon as she was born.

As the daughter of a servant, her path was already carved out. And because she was only half human, she was looked down upon due to her bi-species genetics.
But Mekenna kept her strength, not letting the awful hand she was dealt control or shape who she was.
Vicktor, Savastian, and Fillip were brothers from the planet of Hades, and known as fierce male alien warriors. Their species was known for their brutal and violent nature. They fought to survive, victorious in all they challenged.
And now it was time for them to find a female to share not only their life with, but also their bed.
The first time they saw Mekenna, they knew instantly she was the one.
They’d move heaven and hell to claim her. They’d level anything and anyone who thought to hurt her. And they’d make her see that no matter what, she’d be the most important thing in their world.
They just had to convince her of that.