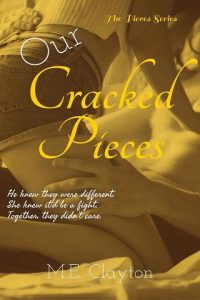 Rowan Lewis was cracked; she knew this.

And she also knew it was her fault. Though her parents were successful, happy, and supportive, and she had a brother who absolutely adored her, she was prone to mistakes just like everybody else. Only, this time, the consequences were something she could never have imagined.

Lorcan Cavanaugh was damaged; he knew this.

But he also knew it wasn’t his fault. With the perfect family dynamics, his temper was the only thing that was an issue for him. However, having wonderful parents and a sister who looked up to him, he’s managed to control his temper. At least, until he couldn’t anymore.

Rowan had no one to blame but herself for her issues.
Lorcan knew exactly who he could blame for his issues.

Ten years later, Rowan thinks she’s conquered her demons. But then, she meets Lorcan Cavanaugh, and she quickly realizes that those cracked pieces of hers hadn’t healed quite like she thought they’d had.

When Lorcan meets Rowan Lewis, he’s immediately taken with her, and a year later, he’s still chasing her. When he realizes that her demons might be darker than his own, he’s determined to break through her walls.

Can Rowan get past her issues long enough to see that Lorcan is the real deal? Better yet, can Lorcan control his temper long enough to understand what is really going on with Rowan?
And are both of them strong enough to leave the past behind them? Or will the past ruin a future they might never have?

Note: This book contains dark themes, delicate subject material, and questionable consent. Please DO NOT purchase this book if you are sensitive to dark subject matter or questionable aggression.