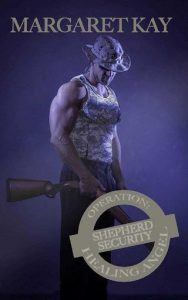 Colonel Samuel ‘Big Bear’ Shepherd, retired on paper only. A West Point Graduate, he served his entire career in the Special Operations Command where he made the necessary contacts to make his agency, Shepherd Security, a reality. His agency was born from the need to have an independent, highly trained, and specialized group that could work outside of the system to accomplish what could not be done within the highly bureaucratic and often ineffectual governmental organizations.

Shepherd never shied away from getting his hands dirty. He actively engaged, leading his men on the toughest missions. It was on one such mission, nearly five years ago, that Shepherd was shot in the abdomen. Significant damage resulted from his injury, and he has been confined to a wheelchair since. Over the past few months, the pain has increased as well as other sensations in the lower half of his body.

His life has been focused on the mission, leaving little room for any personal distractions…until he meets the attractive and intelligent doctor who immediately impresses him. The doctor who will change his life.

Dr. Diana Palmer is a highly educated practitioner in multiple disciplines to bring the most effective treatments to her patients. Every second of her life focuses on her work with a patient wellness with a holistic approach and mindset, leaving little time for personal relationships outside of her large, close family. Her last romantic relationship while in med school ended with a pathetic whimper, two extremely busy people who had no time for each other. That was one mistake she vowed she would never repeat…until she meets the enigmatic recluse whom she finds to be both warm and personable as well as intelligent and kind. He communicates in a matter-of-fact manner that she respects. She is as attracted to his personality as she is to him physically, a wrong mindset to have, given that he becomes her patient.

Shepherd Security recruits only the best. They can protect someone in trouble like no other because they work in the shadows, invisible, and outside the system where the rules don’t apply–just the oath they took. They don’t exist. That’s also why they can break any suspect and can get answers out of anyone accused. That’s when they’re called in, when someone must be protected at all costs, or when answers must be obtained, by any means necessary.