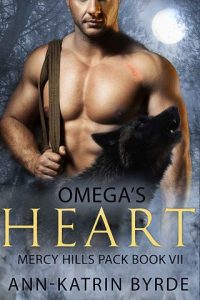 Too big for beauty…

All Felix wanted was what the rest of the White River omegas had–a mate, a home, pups. But when you tower over all your potential suitors, romance is hard to come by. Watching omegas ten years his junior get their happy ever after hurts more with each mating ceremony, so he begs his parents to let him move to Mercy Hills–not to find a mate, but simply to find a future where he isn’t a dead weight dragging on those around him. Instead, he finds a cranky, broken, sarcastic alpha who is desperately in need of someone to sit him down and tell him how things are. And who looks at Felix like the sun shines out of his eyes.

“Your pack are a bunch of fools…”

Kaden came home from the Army heavier by the weight of a useless medal, lighter by several body parts, and with no real idea how to go forward. As he struggles to find his place in the pack, he takes solace in the company of the large omega sent to help him adjust. When Kaden discovers that Felix’s size means he’s never even been kissed, nothing will do for Kaden except to get the jump on all those other idiots who passed Felix up, mate this handsome creature, and give Felix everything his heart has ever desired.

“Come work for me and we’ll change your world…”

Finding a mate is the easy part. As the Alpha’s brother and decorated war hero, Kaden finds himself at the center of two political campaigns and must learn how to walk with a paw in both the shifter world, and the human one. And while he travels, courting the packs in a political campaign the likes of which the country has never seen before, he and Felix become an almost unstoppable pair, determined to forge new alliances between human and shifter, and lay the groundwork for their eventual freedom.