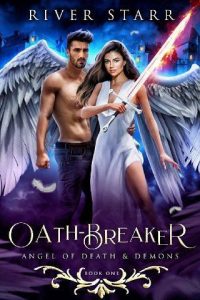 No one survives their meeting with the Angel of Death—except for me.

After being accused of rallying citizens to revolt against him and breaking the rules of engagement with demons to save my best friend—guilty as charged on both accounts—the Angel of Death demands to personally oversee my sentencing in his obsidian castle of demons and death.
I’m done for. This is the end. But my death won’t be in vain—I’ll die a martyr to the Order’s cause, and I’ll rescue my best friend at the same time. She’ll be safe and the paladins will pick a new leader. They’ll thrive and continue the fight.
Or so I think. When judgment day arrives and I’m knelt before the Angel of Death, with his onyx eyes, his ebony hair, and his seductively imposing stature, my soul doesn’t leave me.
It soars.
Because when I dare to look the Angel of Death in the eyes, everything changes. And what unfolds in my anger and vengeance’s stead is a thread of events I never could have foreseen.
I survived my meeting with the Angel of Death. But can I survive his love?