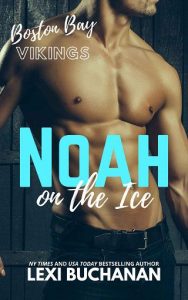 Hockey. For as long as I could remember, that had been my dream. It was the only thing I’d ever done with my father. That was a long time ago. He has never seen me play professionally because of his stroke, and it hurts. He never misses a game on TV, but that isn’t the same. It wasn’t what I expected. Making friends with Daisy had opened my eyes to what my father was missing out on. It wasn’t her fault. Her joy at seeing me play made me feel like I could take on the world.

Daisy led a quiet life in the country, and I’d been thinking recently that I’d like to do the same. I’m good with animals, and Hailee and Sutton’s new animal rescue would be opening soon. With the recent addition of three rookies, it’s not like I’d be leaving the team short. If Daisy would just give me one sign—any sign—that she liked me more than just a friend, I’d give up everything to be with her.

After my traumatic past, I was content here on the farm. I made friends with the horses I trained, and I’d talk their ears off. It was entertaining to have two cockapoos, Fudge and Maple, running around my feet. Fudge would be missed by Maple and me once he moved into his new home with my brother, Sutton, and his wife, Hailee. They were close, only half an acre away, which makes me happy.

If only I could be excited that the Vikings wanted to extend Noah’s contract for another two seasons. He’s a fantastic player, but I miss him terribly when he’s in Boston. I know he wants me in every sense of the word. I want him as well. I’ve never felt this way before, and I’m terrified. I need to dig deep and find the courage to tell Noah how I feel before I lose him to someone else.