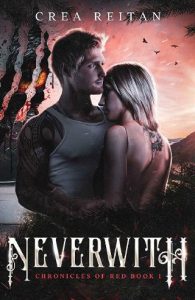 Ira is a Fixer, a child raised and trained to “fix” broken fairy tales by an organization the Fixers refer to as DeadEnd. Because once you enter a fairy tale, there’s no getting out.
Ira has been assigned to Neverland. You know Neverland, where Peter Pan lived because he didn’t want to grow up. Neverland, with fairies and pirates. Neverland, which has consumed thirty-one Fixers before Ira and has been dubbed “toxic” by the Operators of DeadEnd. But Neverland needs to be fixed. It’s been toxic so long that every Neverland story in the real world is being transformed into something entirely not child friendly.
Ira comes from a long line of Fixers. Every female in her family for four generations had been Fixers. She’d been at DeadEnd since she was seven. And when she was assigned her world, Ira was ecstatic. She studied every rendition of Neverland, loving the new adult twists. She was psyched to see what was in store for her.
But when she enters Neverland by falling endlessly through the stars, she is not at all prepared for how dark and broken it is. There are some children, but the violence far outweighs the lighthearted, fun, make-believe world she’d imagined. And Peter Pan… well, he was not at all a child anymore.
She was equally disturbed to find that pirates, fairies, and mermaids were the least of her worries. And disheartened to discover that she has no idea what the true problem is. Where the toxin comes from. What had broken their fairy tale. Never mind how to fix it.
However, Ira was not at all disappointed to be surrounded by wonderful men. All of which were big, gorgeous, and interested – except for the elusive Pan. But who should she choose? Can she trust them? Will they help her fix their world, or are they only interested in climbing into her bed? And why was there a weird lack of women in Neverland?
Everything seems endlessly messed up and is getting less clear as she moves along. It isn’t for quite some time that she realizes the fairy tale she’s been sent in to fix has actually been infected by another…