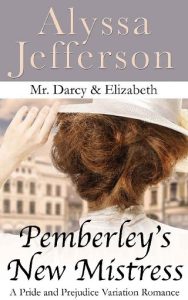 Mr. Darcy was only nine years old when his family began to whisper about the suspicious new baby that had joined the de Bourgh family—a child who had evidently been adopted, but whose true parentage was an utter mystery. Hating the concealment that the de Bourgh family seemed intent on preserving in the case, the rest of the Matlock family shunned them, particularly refusing to accept or acknowledge the girl.

Eighteen years later, Mr. Darcy’s world is upended when his uncle becomes privy to information about Mr. Darcy’s sister that could derail all her future plans. To protect her from Sir Louis’s threats, he agreed to marry the young lady whose history nobody truly knows. Elizabeth becomes Pemberley’s new mistress, and only she can help Mr. Darcy learn the truth about Sir Louis and liberate them both from his influence once and for all.

Elizabeth de Bourgh never expected her father to arrange a marriage for her. Sheltered and protected by her overbearing mother, she had always dreamed of discovering the world beyond Rosings Park. Now, she seems fated to go from one gentleman’s house to another, with no power to prevent any of it.

Furious and betrayed, Elizabeth learns that her family is not at all what it seemed. Her new husband, compelled by blackmail and equally driven to uncover the truth about Sir Louis de Bourgh, joins her in an investigation that leads them across England and into the path of criminals, where they find unexpected adventure and mystery. Though they have never gotten along, Elizabeth and Mr. Darcy must trust each other in order to succeed in their plans; they must both be fearless in order to save the people they love.