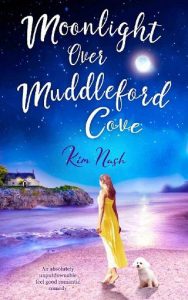 When thirty-four-year-old Nellie Wagstaff loses her job and discovers her fiancé is a cheating scumbag in a single day, she feels like the world has come crashing down. And that’s before the solicitor’s letter, along with a request to visit a place she hasn’t thought about for a very long time.

Heartbroken, Nellie escapes to the beautiful seaside town of Muddleford in Dorset, where she discovers she’s inherited more than she ever bargained for. Nellie never knew why her mother stopped talking to her sister, but now childhood memories of Muddleford come flooding back: long hot summers, the sea glistening beyond the sandy cove… and a stolen kiss with a boy called Jack.

Jack, now a devilishly handsome vet, has the local pet owners swooning over him, and as Nellie and he become close once more, and she gets used to gossiping with the locals and sipping wine at her beach hut with sand between her toes, she’s sure she can feel sparks flying once more. But just as she thinks she might be able to open her heart again, her newest frenemy, the glamourous Natalia, tells her a secret about Jack that changes everything.

Nellie will never know why her mother and aunt parted ways. She’ll sell the house, forget about Jack, and get back to real life. Because there’s nothing for her in Muddleford… is there?