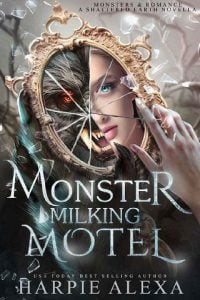 Monster Milking Motel is a high-steam short with very little to almost no plot, but it does include an HEA!

He’s a possessive Alpha and the only thing he wants is her.

Brianna had adapted quite well since The Shattering. She’s carved out a decent life, a healthy split between her daily job and all the other things that she enjoys. Nothing will stop her from living her life exactly the way she wants to…
Except Lycaon. He will. He can’t stand the other males around her. He wants to smash them to a pulp. In order to keep from going insane, Lycaon devises a plan, one that will allow them both to have everything they have ever desired and then some…
Question now is, how much will she beg for her freedom? Because if she begs, he doesn’t think he’ll ever be able to give her up.

Monster Milking Motel is a super short, high steam spinoff of my Monsters & Romance series. It’s set 100 years or so in the future, when the veil between the worlds explodes and changes Earth as we know it! Can be read as a standalone, before or after Monsters & Romance books, and in any order as each story is technically a standalone.
Triggers: monster abduction & minor stalking, plus a variety of kinks such as spanking, stomping (foot on head), biting, breeding, knots, Daddy dom/kink, glory holes, toys, restraints, immobilization, collars, pinching, etc… While this is a short, steamy read, there is a hint of romance and a HEA.