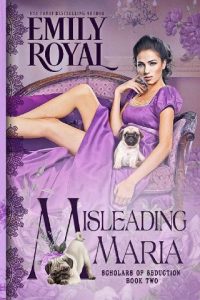 Scholars of Seduction…Lessons in Love…The Battle of the Sexes continues!

Charles Enthorpe, Earl of Axford, a scholar in zoology, sets out to seduce Miss Roman, who makes a living placing lapdogs with society ladies. His delectable quarry is one of the most beautiful women he’s seen, and though he considers pampered pets to be beneath his intellect, he’s determined to play the willing admirer to further the cause of the Scholars of Seduction.
Maria Roman is no fool. The dangerously handsome rake asking to study her lapdogs has an ulterior motive—seduction. Rather than turn him away, she subjects him to a number of increasingly outrageous tricks in order to publicly humiliate him.
Lord Axford’s expert touch breaks down Maria’s resolve, one scorching kiss at a time, and when she glimpses a kind heart beneath the rakish exterior, Maria is at risk of falling in love.
However, Maria has a secret, which threatens to shock society to its core, and, if revealed, could cost her everything.