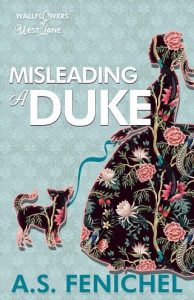 Fans of Mary Jo Putney and Sabrina Jeffries will fall for this delightful story of a high-spirited lady determined to marry for love—but betrothed to a tempting spy whose work has put them both their hearts…and their lives…on the line.

Betrothed to a man she has barely met, Lady Faith Landon calls upon her three best friends—the self-proclaimed Wallflowers of West Lane—to help uncover the secrets of her mysterious fiancé. Her suspicions are aroused when she learns that he has recently returned from France. Is he a traitor to his country? The truth is quite the opposite. Nicholas Ellsworth, Duke of Breckenridge, is a secret agent for the English Crown who has just completed a risky mission to infiltrate Napoleon’s spy network.

After his adventures, Nicholas craves the peace and quiet of the country and settling into domestic bliss with his bride. Until he discovers Faith’s deceptive investigation. How can he wed a woman who doesn’t trust him? But a powerful spark has ignited between Nicholas and Faith that could bring about a change of heart. Faith seizes her second chance to prove to Nicholas that they are a true love match but his past catches up with them when three French spies come to exact revenge. Surviving rather than wooing has become the order of the day.