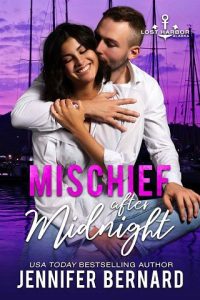 Bartender Toni Del Rey is the quick-witted queen of the Olde Salt Saloon, famous for trading barbs with grizzled fishermen and putting rowdy customers in their place. Independent and fearless, she’s only ever lost her cool over one man—the childhood crush who got away. These days she sticks to the F’s: friends, fun, and fu…well, you know. But now Bash is back, and more crush-worthy than ever. Worst of all, he just bought the Olde Salt, which makes him her brand-new boss.

Bash left Lost Harbor long ago to become a professional fighter—and to forget his nightmarish childhood. He’s only back to return a favor, but when he sets eyes on Toni, he may never want to leave again. His best friend’s little sister has gone from tomboy to tempting, from mischievous to maddening—a fact he can’t ignore while they work side by side at the Olde Salt. But between Toni’s fierce independence, his reputation as “Bad News” Bash, and a few deep dark secrets, they’re hardly suited to anything lasting.

Then again, you never know what a little mischief after midnight will lead to…