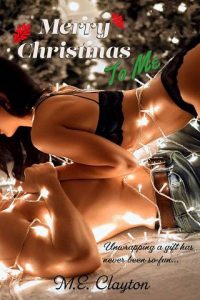 Merry Christmas To Me by M.E. Clayton – Free eBooks Download

Sia Meadows has always played it safe. Between having a respectable job as an insurance firm receptionist, the greatest best friend in the world, and a Christmas bonus that was going to finally make her a homeowner, Sia’s life was blessedly uneventful.
Well, except for that one time she showed up at a party to find her boyfriend of six months sandwiched between two sexy blondes.
Yeah, except for that one time.
Happy with the blood test results she felt the need to take, Sia decides to put that mess behind her, and concentrate on her favorite holiday of the year: Christmas. However, she never would have guessed the Twelve Days of Christmas would be naked ones.

Archer Bentley hasn’t always played it safe. Between owning his own auto shop, having great employees, and being surrounded by the best group of friends around, Archer has nothing against a little trouble, no matter what her name is.
Well, except for those few women, who had pretended to know the score, but then turned into the very definition of a woman scorned.
Yeah, except for those few times.
Happy with being single and hooking up with guaranteed one-night stands, Archer is fine with things just the way they are. And, besides, it was almost Christmas. That was a guaranteed good mood. However, he never would have guessed a beautiful man-hater would put a very Merry in his Merry Christmas.
As part of one of the most humiliating nights of her life, Sia isn’t exactly eager to become friends with Archer. But that’s okay. Archer isn’t exactly looking to be just friends with Sia, much to her shock and confusion.

Can the sexy, cocky mechanic convince Sia to give him a chance at more than just sex?
Can the play-it-safe receptionist convince Archer to give her a sexy Christmas fling only?
Merry Christmas to me.