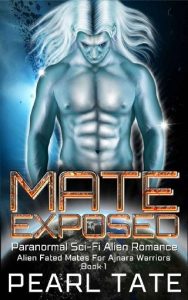 Should an Ajnara alien warrior ignore his orders to protect and rescue a human female from certain death?
Victoria loves her job as a teacher, especially since there’s no baby in her future. So when the world falls into an apocalypse, it’s not surprising she ends up stranded and protecting some children at her school.
Unfortunately, the Earth isn’t safe for anyone, especially not for women trying to survive on their own. After a few weeks, they’re invaded by predatory ruthless men who take over their supplies she was hoarding. How can she escape their obsessive and unwanted attention before even the kids are slaves to their whims? When Victoria sneaks off for help, she almost makes it. But not before she’s trapped by zombie-like infected people determined to kill her.
A monstrous alien warrior saves her life, but then captures her later and takes her back to his spaceship—essentially kidnapping her! The dominant alpha male is convinced she’s his fated mate, spewing nonsense about linking.
But can she trust him when she’s already made too many poor decisions? Choices that endangered her and her students?
Jerlo has always followed the rules, and all it’s gotten him is shipped to a primitive planet to babysit from the sky. But when a weapon damages his protective helmet and he locks eyes with the brave female, it sets off a chain reaction that’s impossible to stop.
She’s his and in danger. That’s all he needs to know.