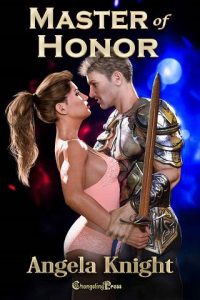 A month ago, Cheryl Parker thought she was an ordinary woman — a nurse, a mother, a woman whose lover had walked out. Now she’s gained incredible power thanks to an alien spirit who has made her immortal. She looks twenty again. And her ex is back.

It’s not unusual to discover an old lover kept secrets, but some are harder to believe than others. Ulf’s secret is that he’s an immortal vampire Knight of the Round Table. The good news is, he still loves Cheryl. The bad news is, he thinks the creature inhabiting her is a potential threat to humanity. The worst news is, there is a threat — and it could well kill them all.

Ulf wants nothing more than to be with Cheryl again. The problem is her magic resembles that of a dragon who tried to set a small town ablaze. And she knows more about the creature than she’s saying.

Even as passion rekindles between them, Cheryl and Ulf must overcome years of lies and mistrust. Otherwise they’re doomed — and so is everyone else. Because the creature stalking them is something worse than a dragon. Much, much worse.