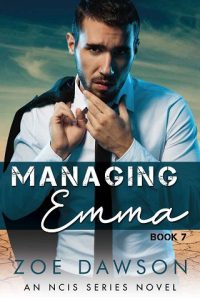 NCIS agent Derrick Gunn is called to a crime scene where a U.S. Navy petty officer is found dead. Her death is odd, but it appears nothing is missing until Emma St. John, the woman’s sister shows up and alerts Derrick to the fact that her nephew is gone. Alarmed for the child’s safety, he insists that Emma leave the case up to NCIS, but she stubbornly defies him. She follows her own path, and she doesn’t want to listen to him. In the past that led to disaster and he won’t work with someone who doesn’t follow his lead, no matter how many sparks fly off from their friction.

Private Investigator Emma St. John refuses to take no for an answer and joins Derrick in the search for her nephew—an investigation that leads them into Mexico to come up against a dangerous drug cartel boss who may have taken the baby for his own personal reasons. Derrick is exactly the kind of man that she’s had to fight against all her life. The know-it-all bossy alpha male. One who thinks he needs to take control of everything. She’s not going to kowtow to him or his official badge when her nephew’s life hangs in the balance. She’d rather go it alone, but they join forces and race against the clock to save her nephew from a terrible fate.