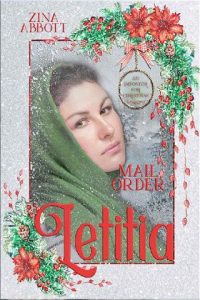 To save him from being swindled, she must deceive him.

When forced to live with her late mother’s much younger sister, Aunt Matilda, she and Uncle Clyde made it clear that if Letitia wishes to eat, she will participate in the family business ― swindling people. Matilda’s latest scheme is writing to well-to-do men seeking wives through correspondence, with Letitia doing the writing. Collecting spending money and tickets to be cashed in is bad enough. The last straw for Letitia comes when Matilda decides to travel to marry a rancher she learns is well-off. She is already married to Clyde, isn’t she? Then there is the manner in which Clyde puts his hands on Letitia’s shoulders and assures her he will take real good care of her until Matilda returns.

Samuel Grayson has spent a decade building a successful ranch near Laramie, Wyoming. He now wishes to marry. After writing three letters to Matilda in Baltimore, he decides she is the one for him. He wants her in his home as his wife by Christmas.

Until the letter with tickets and money from Samuel Grayson arrives, Letitia had never, of her own free will, stolen anything. However, she sees this as an opportunity to save this unsuspecting rancher from Matilda and herself from Clyde. She only hopes, if Samuel Grayson ever finds out the truth, he will see it the same way.