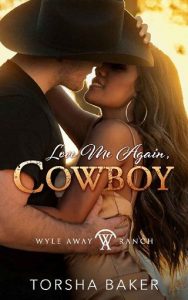 The best revenge for a broken heart is becoming fabulously rich and famous.

Emmy Award-winning actress Malia Kalama has money, fame, confidence . . . and a gaping void in her life. To fill that void, Malia is convinced she must land a role in the next blockbuster, but a scheme to get noticed by Hollywood’s top producer ends with Malia’s name splattered all over the tabloids. She decides to escape to her family in Bisbee, Arizona, while her publicist cleans up the mess. Eight years is plenty of time to be over the hot cowboy who shattered her heart—right?

Jaxon Wyle gave up the chance for true romance in order to raise his daughter. It’s a decision he doesn’t regret, except when he watches Malia through his TV screen like some star-struck fan—and yes, he’s fully aware how pathetic that seems. When his brothers discover that Jax’s drug-addicted ex is threatening a custody battle over his daughter, they convince Jax to stop avoiding dating and search for a bride to help him win in court. When Malia shows up in Bisbee, looking amazing and putting Jaxon in his place like no other woman can, he realizes this is his last chance for happiness with the woman he never stopped loving.

Malia and Jaxon’s affection for each other becomes even stronger than when they were teens, but Malia’s Hollywood lifestyle of lies and deception battles with Jax’s desire to provide a stable life for his daughter. And Jax’s problematic trait of thinking he can handle every situation on his own threatens to end their relationship in a repeat of their first break-up.