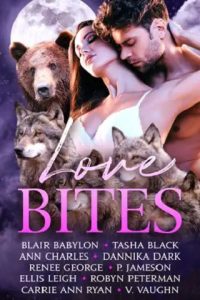 10 Bestselling authors bring you a tasty selection of shifter romance. From romantic suspense to laugh-out-loud comedy, these books will satisfy your paranormal love story cravings. It is our hope you find new authors to keep your entertained. Thank you for reading.

The Alpha of the Talon Pack finds his mate in the daughter of the rival Pack…a submissive wolf ready to take on the world for her family. Gideon and Brie will have to fight until the end of days in order to test their boundaries and their mating bond…or all will be lost.

I don’t believe in magic, until I find out I’m a witch.
I barely have time to unpack at Primrose Academy before I’m chosen by a gorgeous wolf-shifter who claims I’m his mate. Now, I might have to decide between spending forever with him and pursuing my magic, if we survive the dangers lurking outside the school…

Little girls are vanishing from Deadwood, South Dakota, and Violet Parker’s daughter could be next. She’s desperate to find the monster behind the abductions. But if she’s not careful, Violet just might end up as one of Deadwood’s dearly departed.

Lexi hasn’t seen Austin Cole since her brother’s funeral. When he shows up unexpectedly and reveals he’s not only a bounty hunter but also a Shifter, her world turns upside down. Passion ignites between two old friends who risk everything to protect those they love in this unforgettable paranormal romance.

Mating fever is for old dragons, idle romantics, and suckers. Yet, as witch Bethany casts her glittery, sparkling spells and summons adorable, fluffy creatures, Mathonwy watches. He can’t take his eyes off of her. But he isn’t falling into mating fever.

Thank You For Not Shifting (Peculiar Mysteries) – Renee George

After a crappy year, all Chavvah wants to do is focus on the future, including letting go of any notions she might have had about a certain sexy werewolf doctor. But after a murder occurs close to home, the doc’s behavior changes from clinical to territorial, making Chav as worried for her heart as she is for her safety. She’ll need more than an apple a day if she wants to keep this doctor away.

Ready To Were – Robyn Peterman

I never planned on going back to Hung Island, Georgia.

But here I am, trying to wrap my head around what has happened to some missing Weres without wrapping my body around the obnoxious, egotistical, perfect-assed Hank. I hope I don’t have to eat my words and my paw.

He’ll break his clan’s oath to protect his mate. She’d do anything to make up for her past mistakes. Together, they’ll start a fire too hot for these mountain shifters to ever contain.

One human with a horrible dating history, one wolf shifter in town for a celebration, and one chance meeting that throws them together in fate. Like father, like son has never been so wrong…or so right.

Called by the Bear – V. Vaughn

Driving to Maine from California because of sexy dreams and a tattoo nobody but my best friend and I can see is crazy. But what’s wild is that our dreams come true, complete with the bear part. Now we’re in the midst of a secret world of werebear, smoking-hot true mates included, and I think it’s our destiny to save them all.