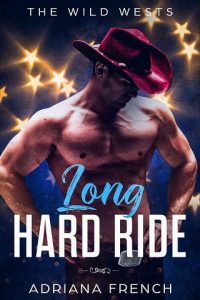 Shane West is known around these parts as one that got away. Oh, he’s happy to take the ladies on long hard rides night after night, just as long as there’s no commitment. With his piercing blue eyes, and unflinching stare, he’s a man of few regrets, and no strings.

Shane shouldn’t have promised Chuck he’d protect his property and keep his granddaughter safe from her dangerous boyfriend. But Shane’s loyal to the core, and Chuck was on his deathbed. Six months of wedlock seemed like an easy tradeoff to let the man Shane considered a father die in peace.

Now Shane’s got an unbroke filly on his hands.

How long will he be able to control himself around the prettiest woman he’s ever seen? She’s prancing around the house practically naked, begging him to take her V-Card.
Oh, he’ll take it alright. He might just have to train her while he’s at it.
And once he does, he’ll never want to let her go.